Prague, the capital of Bohemia and the Czech Republic, is considered one of the most beautiful cities in the world, attracting millions of visitors every year who want to discover its innumerable and charming corners. Its old town is a World Heritage Site.

As it could not be otherwise in a city that is among the 20 that receives the most tourists from all over the world, the number of bars and restaurants that you will find when you travel to the Czech capital is enormous. Finding a place to eat in Prague won't be a problem, although it doesn't hurt that before you enjoy Prague's innumerable cultural and artistic treasures, find out a little about its gastronomy and, especially, about one of its star dishes that you'll find at almost all of its food outlets: goulash.

What to eat in Prague

Eating in Prague will allow you to get to know the wide variety of dishes in its gastronomy, characterized by its intense flavours and colourful presentation. Many of the typical dishes that you can eat in Prague are based on a balanced combination of meat and vegetables, with copious use of spices.

You must know that, unlike in Spain, where the menus are for two dishes (not to mention the three of the winches in Asturias), in Prague, they are usually for a single dish. But don't worry, you won't leave hungry. The amounts are gargantuan.

Typical dishes of the Czech culinary art are soups (among which ceská brambovorá, zeinacka and drstkova stand out), utopenek (macerated and highly spiced sausages), knedliky (balls of bread with which many meals are accompanied), and goulash, the subject of this article, a dish of Hungarian origin but totally assimilated by the Czechs, to the point of being one of the great references of their gastronomy.

Goulash is a very hearty, spicy dish made from meat, onion, peppers, and paprika, which looks similar to a ragù or stewed meat. It is a simple dish whose only secret, and on which its quality depends to a large extent when it is served, on its cooking time needed, which is quite long. It is served in almost all restaurants in Prague, usually with potato salad and parsley or Spatz pasta.

Here is a short guide to where to eat this exquisite Czech dish in Prague.

Where to eat goulash in Prague 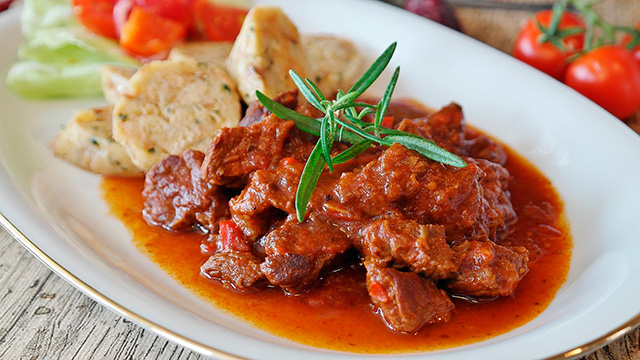 It isn't difficult to find a good goulash in the countless restaurants and taverns of the capital of Bohemia. Its consistency is such that with a single dish, you will feel satiated and revitalized enough to continue with the many visits you have scheduled. These are the best restaurants in Prague to eat goulash with an excellent price-quality ratio.

Rustic, traditional-style tavern with excellent beers and with, what is considered to be, the best goulash in Prague. Presented in a loaf, it stands out for its crispy bread, its aroma, and texture of the meat. Very crowded, both by locals and tourists, it is advisable to book in advance if you plan to go during rush hour. Good service and moderate prices.

Picturesque and popular tavern, it is very frequented by tourists. Its specialties include pork knuckle, sausages with potatoes, and of course goulash, priced at 8.50 euros per dish. With live music, you have to be careful with the shots they offer you: they are very tasty liquors, but you have to pay for them.

Traditional-style place that, although it does not have a very extensive menu, it must be said that what they offer is really tasty. Its star dishes are the knuckle, the stuffed potato dumpling and a wonderful meat goulash that only costs 5.40 euros.

A restaurant that, this time, does present more than a complete menu. Very cheap, many of their hearty and delicious traditional-style dishes cost less than 5 euros. Goulash is served in crumbles bread rolls that are used as bowls. It is also a very suitable eating house for vegetarians since among its varied offer there are many salads and vegetables.

One of the cheapest places in Prague, which presents very tasty and abundant dishes. You can eat goulash and a good plate of pasta, in addition to the drink, for about 5 euros.

If you want to follow a GTC (good, tasty, and cheap) diet when you travel to Prague, some good goulash dishes are your best option.

DISCOVER ALL OUR DESTINATIONS